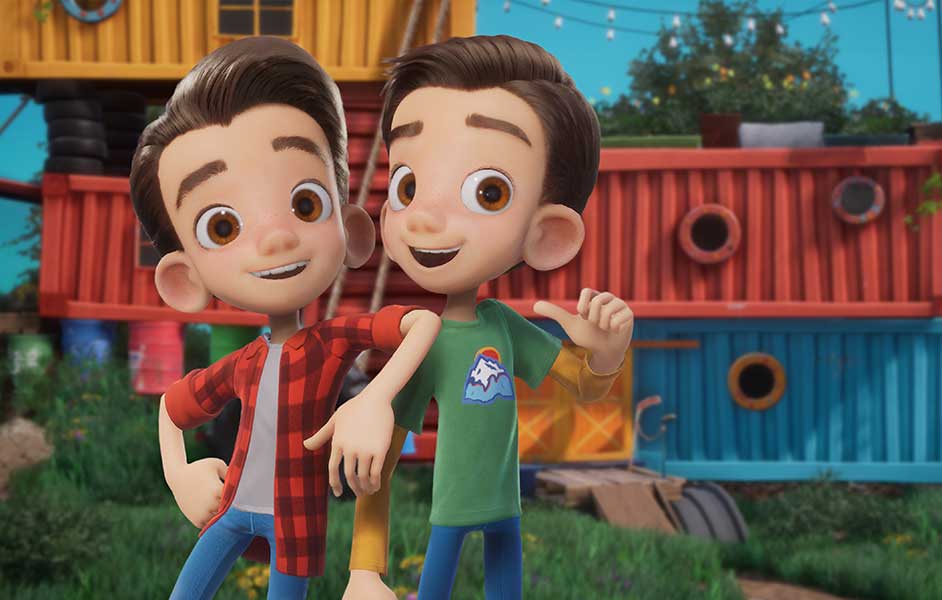 The highly-anticipated original series for kids ages 4-7 marks a milestone for both Sinking Ship and Drew and Jonathan Scott, as it is the first 3D fully-animated show from Sinking Ship and the first kids’ production from Scott Brothers Entertainment. The 20 x 22-minute episode series will feature animated versions of the popular twin renovation experts Drew and Jonathan as 8-year-old boys trying to solve neighborhood problems – one big dream at a time. Sinking Ship’s Carla De Jong and Scott Brothers Entertainment’s Amory Millard will executive produce.

“Builder Brothers’ Dream Factory is an exciting project for us on many levels, and now we get to work on it with the talented teams at Nelvana and Corus, too,” said De Jong. “We’re building this new series to resonate with kids and families, just as Drew and Jonathan’s home renovation programming appeals to audiences of all ages in over 160 countries worldwide.”

“This new series aims to help children understand that, with imagination, creativity and determination, they can accomplish big things,” said Millard. “The series concept is inspired by the brothers’ childhood and the core values their parents instilled in them from a young age. They have continued to uphold these values in all aspects of their lives, and we’re delighted to partner with like-minded companies to make this optimistic and feel-good series a reality.”

In Builder Brothers’ Dream Factory, Drew and Jonathan’s extraordinary imagination, creativity, grit and heart – coupled with a big dose of “twin-spiration” – help solve problems in their neighborhood by dreaming big…really big…sometimes too big! Along with their dog Moose and best friends, Mel, Cee-Cee and Aiden, the Builder Brothers navigate the highs and lows of trying to make the world a better place – one big dream at a time.

A character-driven comedy series at heart, the series doesn’t shy away from real kids’ issues and what they go through in navigating life’s ups and downs. It encourages kids to share their ideas, dream big, and not be disheartened. Its focus on resilience and problem-solving is what helps set the show apart.

About Nelvana
Entertaining kids for over 50 years, Nelvana is a world-leading international producer and distributor of childrens’ animated and live-action content. Nelvana produces a stable of award-winning and globally renowned brands that focus on comedies, preschool and action series and ancillary consumer products programs. Nelvana’s content airs on Corus Entertainment’s kids channels in Canada and in over 180 countries around the world. The Nelvana library has well over 4,700 episodes of programming and has received over 70 major international program awards including Emmys® and Canadian Screen Awards. Visit the Nelvana website at nelvana.com.

About Scott Brothers Entertainment
Scott Brothers Entertainment (SBE) is a multifaceted production company that strives to develop cutting-edge entertainment by combining years of experience in film, television, and digital media. Winner of the Most Innovative Producer of the Year Award at the 2019 Banff World Media Festival, SBE is the brainchild of co-founders Drew and Jonathan Scott and has evolved from start-up to competitive content creator with a laser-sharp focus on innovation, expansion, and working with like-minded partners. For more information, visit www.sbentertainment.com.

Among the series currently in production are the third season of the worldwide success, Odd Squad, as well as the upcoming new series, Jane, inspired by and co-produced alongside renowned primatologist Jane Goodall. Currently in pre-production is the series Builder Brothers’ Dream Factory, in partnership with Scott Brothers Entertainment. In addition to its critically-acclaimed productions, Sinking Ship operates a cutting-edge VFX and Interactive Studio, creating multi-platform digital experiences and interactive content for audiences around the globe. For more information, visit the Sinking Ship website, Facebook, Twitter, and Instagram.